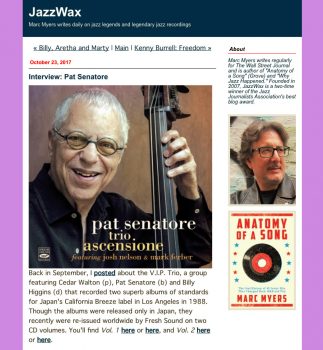 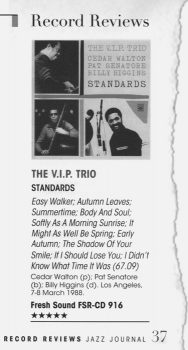 This is the review from JAZZ JOURNAL (London) of the V.I.P. Trio, Vol. 1, that’s just been re-released on Fresh Sounds. The recording was in 1988 with Cedar Walton and Billy Higgins for the Japanese market. The Jazz Journal awarded 5 Stars. As a result, Jordi Pujol of Fresh Sounds Records is releasing Vol 2. 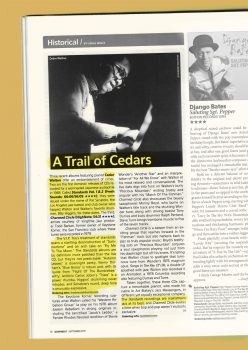 “So much experience and so much knowledge” 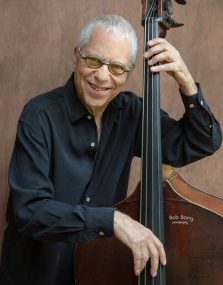 If not for one hard-nosed violin teacher, this profile of Pat Senatore might be appearing in Gramophone instead of JazzTimes. The bassist, a mainstay of the Los Angeles jazz scene for 55 years and a veteran of bands led by Stan Kenton, Les Brown and Herb Alpert, began his musical training at age 5 in his hometown of Newark, N.J. “My dad was from the old school,” says Senatore, now 79. “It was his wish that I play the violin, because he thought that was the most important guy in the orchestra. So I studied with this Italian teacher who was really very hard to deal with. If I didn’t have my lesson down, he would lock me in a room and I would have to practice. That was pretty heavy, so by the time I was 10, I said, ‘I don’t want to do this anymore.’”

In grammar school, Senatore made the acquaintance of Wayne Shorter, with whom he has maintained a lifelong friendship. Both students displayed such creative aptitude that they were accepted into Newark Arts High School, alma mater to jazz totems including Sarah Vaughan and Woody Shaw. Senatore also spent many teenage evenings attending less formal educational institutions. “I’d go to Birdland, and I had phony ID. You had to be 18 years old; I was 16 and looked 14. … The music just spoke to me, and from then on that was my whole life.” He likewise recalls encountering Scott LaFaro during that iconic bassist’s stand at the Village Vanguard with the Bill Evans Trio. “I was pretty stoned when I went there the first night,” Senatore admits, “and I just thought I was hallucinating. I never heard anyone play the bass like that. Then I went back the next night completely sober, and I was gonna go home and forget about ever playing the bass again. That was my real first influence, as far as setting the standard.”

In 1960 Senatore made his way to L.A. Due to strict union rules keeping outsiders from poaching local gigs, he established his residency while working at the now-defunct Wallichs Music City, a Hollywood record store, ingratiating himself with union reps and playing in jam sessions. Senatore’s first major gig was with the Stan Kenton Orchestra, in which he’d record several albums, including 1962’s classic Adventures in Jazz. “Stan really had a passion for what he did,” Senatore recalls. “He lost numerous wives to the road, but it was the utmost thing in his life. His wasn’t what you would call a bebop band; it was more of a sounds band. He was really trying to be progressive. He prided himself in that, trying to move the music in different directions.” Kenton’s influence has stayed with the bassist in a more personal way as well: In the bandleader’s honor, Senatore and his first wife named their eldest son Kenton. (He’d find his own fame as a teenager during the ’70s, as professional skateboarder “Kent” Senatore.)

To read the rest of this story, purchase the issue in print or from the Apple Newsstand. Print and digital subscriptions are also available.