Listen to tracks and purchase on CD Baby.

Josh, Mark and I had a blast!  We had a beautiful turnout with an appreciative audience for the “Ascensione” CD Release Party at Vibrato on November 3, 2013.  Producer, Jordi Pujol, came from Barcelona to celebrate with us. 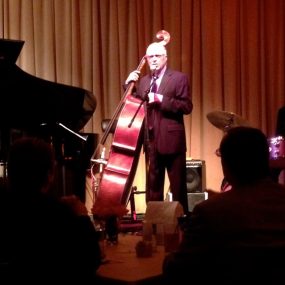 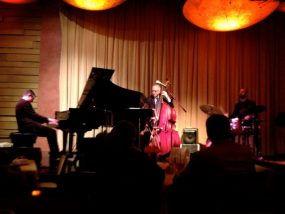 Pat Senatore, the Artistic Director for Herb Alpert’s Vibrato Grill Jazz in Bel Air, CA, performs there regularly and just released a CD, Ascensione, on Fresh Sound Records, which evolved over the last few years with his trio, featuring Josh Nelson on piano and Mark Ferber on drums.

It seems Senatore was destined to become a musician.  It’s in his DNA.  His father grew up in Compania, Italy, singing Neapolitan folk songs in theaters.  Pat followed a family tradition and studied violin as a child but it was not until he took up the bass and heard Scotty La Faro did he know for sure he wanted to be a jazz musician.  His passion for jazz was so strong that he left the Julliard School of Music in New York after two years because it did not recognize jazz at the time.

He took his studies from the classroom to the rhythm section of various big bands.  He toured the country with the Stan Kenton Orchestra.  During his tenure with Kenton, he recorded Adventures in Blues, and Adventures in Jazz at Capitol Records.  Having moved from Newark, New Jersey to Los Angeles, California he was happy to stay put in his new home long enough to work at the famed Coconut Grove with the Dick Stabile Orchestra.  Then he joined the Les Brown Orchestra and went to Vietnam with Bob Hope.  Upon returning, he performed with two weekly television shows:  The Bob Hope Show and the Dean Martin Show.

Then he met Herb Alpert who asked him to join the original Tijuana Brass.  In five years, they recorded nine albums, performed on all the major networks, including the legendary Ed Sullivan Show, did five TV Specials and numerous world tours, performing Command Performances for President Johnson, Queen Elizabeth II, and the King of Thailand.

While music may be in his DNA, so is being an impresario.  As a child he used to dream about presenting music in the pizzeria his father talked about building in the family garage.  That vision evolved over the years and in 1977, Pat and his wife, Barbara, opened a jazz club on the beach in Malibu called Pasquale’s.  With the waves crashing beyond the glass walls (and often celebrities in attendance), Senatore performed with his own trio, which rotated such pianists as George Cables, Alan Broadbent, Larry Willis, Roger Kellaway, and Victor Feldman with drummers Roy McCurdy, Billy Higgins, Ralph Penland, and Peter Erskine. The format expanded to include top soloists, such as Joe Henderson, Bobby Hutcherson, Frank Rosalino, Joe Pass, Toots Thielmans, Art Pepper, Ernie Watts, Freddie Hubbard, Eddie Harris…to name a few.  Senatore has a special knack of combining just the right players.  For instance, he was the first one to put Freddie Hubbard and Joe Farrell together.

Over the years, Senatore has worked on a wide range of films/TV movies both as a performer and as a studio musician, including Man On The Moon, Out to Sea, Bugsy, Armed & Dangerous, Barton Fink, Gypsy, Sinatra, and others.

Ever entrepreneurial,  Senatore produced many noteworthy CD’s for Hi-Brite and Moo Records including: two volumes of the VIP Trio with Cedar Walton, Billy Higgins and himself; Pasquale, with himself, Billy Childs, Billy Higgins,  Paul Hanson (bassoon), Pedro Eustache (flute), Mike Barone (trombone), which features many of his original compositions.   In 2000, Senatore, Milcho Leviev, and Kevin Tullius formed the Trio LeSenTu, a cooperative group  whose name is a play on the combinations their three last names.  Before Kevin Tullius’ untimely death, they recorded Trio LeSenTu for Explosive Records.